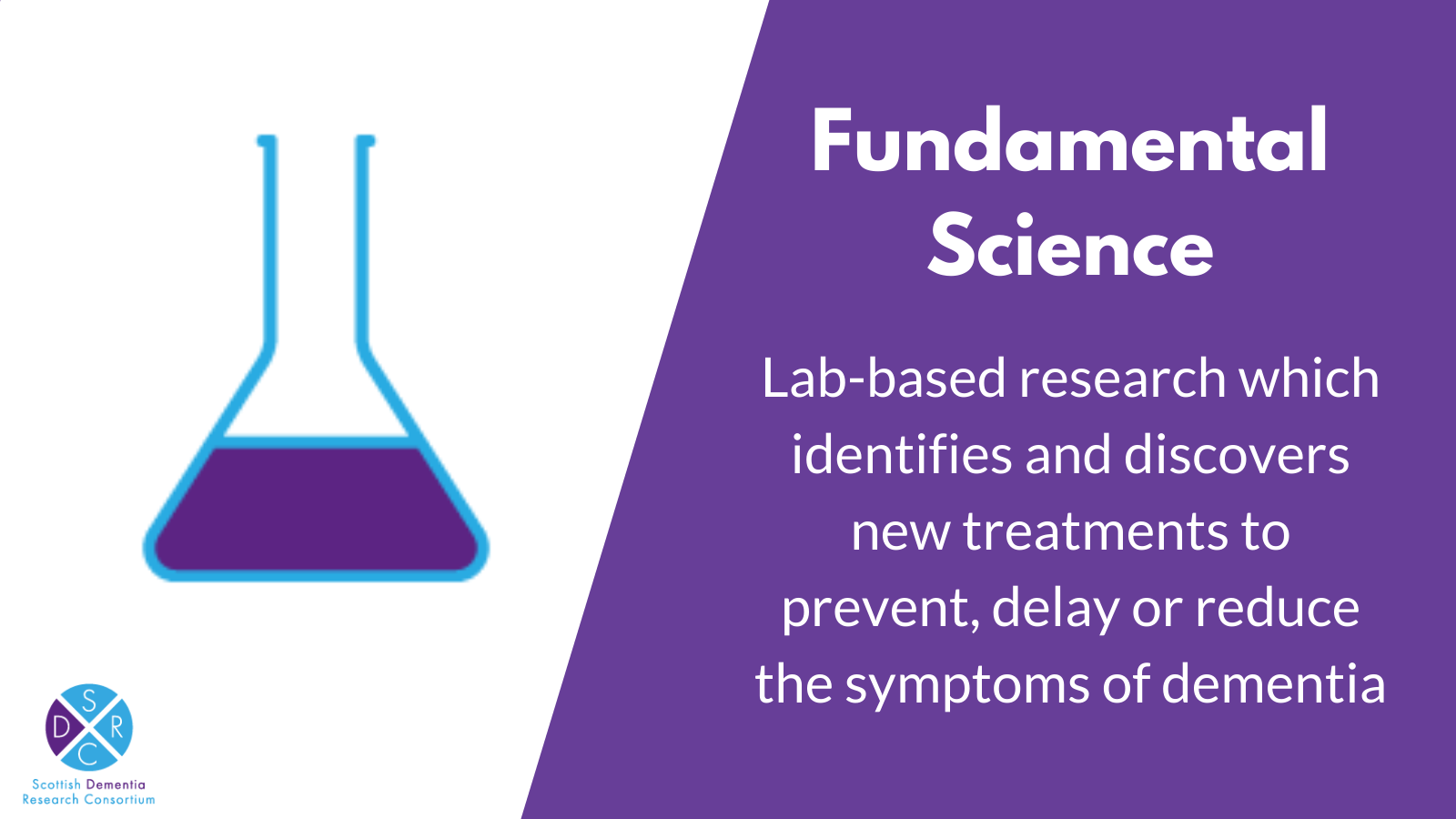 In the SDRC Annual Report 2021/21 we dedicated a section each to the progress and ongoing work of the SDRC research themes.  The following extract is focusing on the Fundamental Science theme, led by Professor Frank Gunn-Moore and Dr Sophie Bradley. Read more below.

Fundamental science is the creation of new drugs and tests that can be used to better diagnose and treat dementia in the future. This area of research is the foundation for the development of treatments for dementia.

Scotland has a strong community of world-class fundamental scientists working in the field of neurodegenerative disease. Many of the major advances in this field, such as animal modelling, stem cell research and the MRI machine have their roots here. In addition, Scottish academic publications have highlighted major breakthroughs in much of our understanding of what we know about neurodegenerative diseases today.

The concentration of drug discovery research in Scotland is unparalleled in Europe. At present, work within the Fundamental Science theme spans from the atomic level of understanding of a potential drug target, to evidencing that humans are not the only mammals to show the chemical signs of dementia. This rich understanding has led to new and world leading facilities that are aiming to translate this knowledge into potential new therapies.

Fundamental sciences in dementia research can also draw on the expertise of all Life Science researchers in Scotland, plus also the wealth and strength in depth of other disciplines including Chemistry and Physics, making it a truly interdisciplinary field. This cross-discipline approach has been recognised as an example of best practice by higher education institutions across the world and by the Scottish Government

From Donkeys to Hippos

In the last year, there has been a continuation of expanding new areas of research now encompassing dementia and neurodegeneration research, some of them from surprising sources.

For example, two studies from the Roslin Institute and Royal (Dick) School of Veterinary Studies, epitomise such a claim with new mammalian species joining the increasing number of animals now reported to show biochemical signs akin to Alzheimer’s disease. Specifically, following on from the hypothesis that animals with exceptional longevity and associated insulin metabolic issues, domestic donkeys can now be added to this list of animals. Specifically, in Malbon et al., 2022 (doi.org/10.1016/j.neurobiolaging.2022.01.007), the parietal lobe and hippocampus of aged (>30 years) were evaluated immunohistologically for the presence, distribution, and frequency of neurofibrillary tangles (NFT) and amyloid plaques (AP). AP were observed in the parietal cortices of aged donkeys and NFT-like structures were observed, primarily within cortical areas. In addition, there was also further signs that our feline domestic companions are also showing changes more associated in human material. In Sordo et al., 2022 (doi.org/10.3389/fragi.2021.684607), 55 cats were studied and showed both intracytoplasmic and extracellular deposits of Aβ, as well as intranuclear and intracytoplasmic hyperphosphorylated tau deposits, and with a similar progression of aggregates starting in cortical areas and later progress to the hippocampus.

From Strathclyde, Trevor Bushell’s work on the immune system and its role in neurodegeneration comes into focus with funding coming from the ARUK which will answer the question: Does immunomodulation promote resilience to Alzheimer’s pathology? This is based on his work of how specific receptors can influence behavioural changes through the modulation of cytokines (Moudio et al 2021; doi.10.1007/s00213-021-06040-1.) and also that Interleukin-16 plays significant roles in the Central Nervous System during neuroinflammation (Al Dawsari et al., 2021 doi.10.3390/biology10060472).

Also from Strathclyde, major funding for Shuzo Sakata came from his interdisciplinary research both from the MRC on Sleep regulation by neuron-astrocyte interactions (~£0.5M), but also his involvement in Horizon 2020, Research and Innovation Framework Programme, Deep brain photonic tools for cell-type specific targeting of neural diseases. (~€5,7M). This is based on a series of publications from his group on brain states and Alzheimer’s disease pathology, and also astrocytic calcium dynamics during the sleep-wake cycle (Byron et al., 2021: doi.org/10.3390/biology10080707 and Tsunematsu et al., 2021: doi.10.1523/JNEUROSCI.2912-20.2021)

Lastly was the developing hypothesis that a relatively newly discovered biochemical pathway (the Hippo signalling pathway) which is normally associated with the development of cancer, now has the potential to also to be involved in neurodegeneration. Holding out the possibility of yet more drug targets that could be repurposed from cancer studies (Chen et al., 2021; doi.org/10.3390/cells10113024).

As ever, it was a year of new and sometime surprising connections that were made.

If you want to know about dementia research in Scotland, click here to read the SDRC Impact Report 2019 in full.

Find out more about the SDRC research themes here